skip to main | skip to sidebar

I am working on the painting of the Crucifixion I started at Artists of Grace. I got there early today (Saturday) and started painting. I put some more of the abstract lower background first and then worked on the head and neck. I worked on a close up figure for a while and then people began emerging from the abstract background. Then I saw the temple in the background with the light coming down to split the veil.
Posted by judy at 11:31 AM No comments: 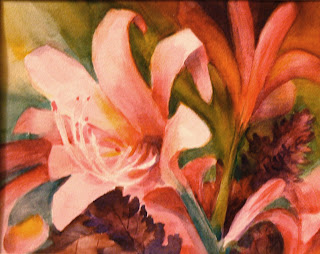 I started this one at Artists of Grace, worked on it at the Gallery and then finished it at home. This was done before the Owl. I was trying to get the background to move back and be soft.
Posted by judy at 7:35 PM No comments: 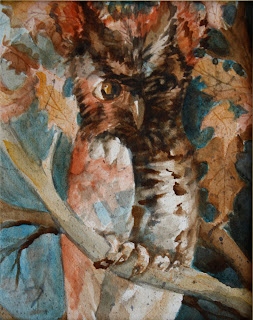 This did not turn out the way I envisioned it. There is much more contrast and color. I pictured something soft, but then the owl is a predator. I struggle with making a painting that holds up from a distance and the fact that the owl is really camouflaged in his environment. I did start the crucifixion at Artists of Grace last night, but have to leave it there--its rather large and so cannot work on it again until Saturday. It is still emerging.
Posted by judy at 3:17 PM No comments:

I am starting the crucifixion painting at Artists of Grace. I like the head I sketched but the canvass is not large enough for the size of that head. I am thinking about having the arms stretch off the canvass. One of the other artists had just the hand as a sculpture extending out from the cross, but she could not hang it because it was too powerful for children to view. It could be all good that the hands are left off. I want to emphasize the Christ was still God even through all the pain so emphasize the face and eyes with power and have the rest of the body with torn up palette knife strokes. Maybe it will be strong enough, but not graphic enough to scare children.
Posted by judy at 4:10 PM No comments: 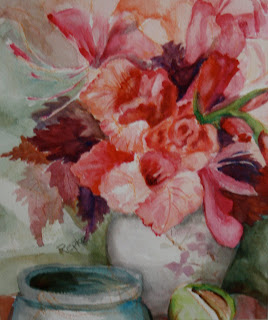 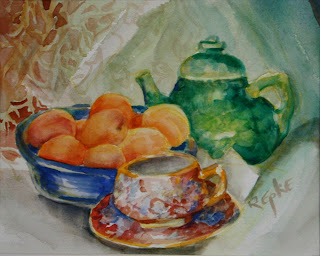 I have been painting still life subject matter that I had already painted. I never thought I would see the value in doing this, but the second painting of gladiola bouquet was different than the first and had some good qualities--composition. The third painting of gladiola bouquet was different and a looser more free version. The second painting of apricots was a lot better. Now I am thinking of painting a version of the crucifiction again. The first one burned in a fire. I think the sky will be better on this one. I trust that God will bless it.
Posted by judy at 8:46 AM 1 comment:

Step Away From the Painting

A new saying I learned at Grace Artists--"step away from the painting" Which I kept saying to myself as I worked on the watercolor that I started at Grace.
Posted by judy at 3:44 PM No comments:

Did my pages today. Went somewhat better. Went to paint with Artists of Grace. These folks are with Grace Church. I like the church and enjoyed the group. Painted water color of apricots again. Doing a better job of getting them in the bowl.
Posted by judy at 12:58 PM No comments:

Started the morning pages. I can't keep writing that long. It hurts my hands. I will have to write larger. I did start and stop several times. I really do not want to give up any time to do it, but I will.
Posted by judy at 10:26 AM No comments:

I am reading Julia Cameron's The Artist's Way because Marvel talked about it in her blog. Already I am moved to tears by the idea God the Great Creator loved other artists.
Posted by judy at 6:44 PM No comments: 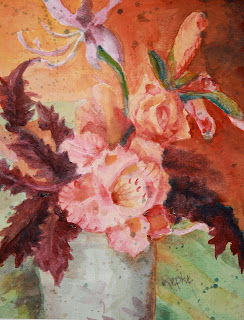 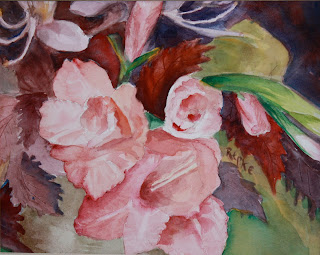 I have painted the gladiola bouquet twice already. The first one was at a farther distance. Then I painted it closer up to make more of a study of the gladiola flowers. I was at the gallery today and decided to paint it again. I seem to be inspired by this selection of flowers and leaves. I am still working on the one from today. It's farther back again with a couple of other objects in the composition.
Posted by judy at 5:16 PM No comments: 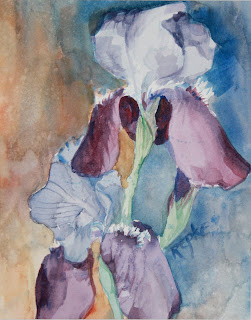 I like painting flowers with water color. This is one of my favorite flower paintings. I like the close up view, but I have a photo of a garden full of iris. I wonder if I can paint it so that some move far into the background with less detail and some are closer, larger and with more detail?
Posted by judy at 5:09 PM 1 comment:

I was taking wash down and passed through my studio and saw the girl with flowers painting. I must have worked on it last time when the light was gone. Horrible color applied in the wrong place. The sun is shining in the windows today and I had to correct it.
Posted by judy at 9:39 AM No comments: 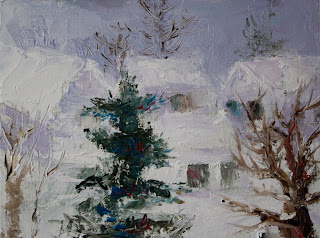 I did get up and paint what I saw out the window. I needn't have taken coffee and breakfast up to my room because I could paint without it. I did drink the coffee and eat kolachky and contemplate the painting though. I made a few additions after contemplation. . . told myself to stop. An impression is something quick. . . Don't work it over or it will be gone. Sitting with the coffee, I saw another painting from a different angle out the window, but did not have another easel set up. Wait a bit you can do it later. Heavy snow was blowing and patterns of branches were interesting. I looked out later and it was all changed blowing snow that had obsured some branches and buildings was gone and the sun was up higher. The whole impression was gone. Now I could see other buildings instead of the emphasis on branches that the snow gave. I did not realize the impression could be gone so quickly. I have a porchade box to store wet paintings. I should have taken the first one off, put it in the box and quickly started the second one. I have learned, but that impression may never be seen again.
Posted by judy at 7:25 AM 1 comment: 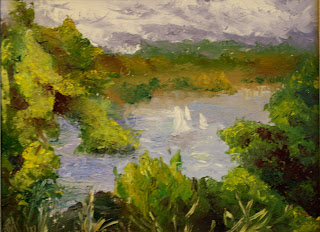 This is painting en Plein Air with oil and a palette knife. This is what makes me happy now and I want to set up an easel in my bedroom because when I wake up I see the early morning scene I want to paint out my window. I'll have to set it up the night before so I can grab the early light immediately. I am also thinking about taking my coffee maker upstairs and maybe some granola because I can't stop to go down and eat.
Posted by judy at 3:02 PM 1 comment:

Started a water color of guitar players at the gallery today. I usually paint the foreground in lightly and then put the background. I am all over the place today and started with the background. The composition is complex and the paper only 9x12. I don't know if I have much hope for this attempt.
Posted by judy at 2:43 PM No comments:

I updated my website today.
Posted by judy at 10:37 AM No comments:

Now I am baking Kolachkey (my phonetic spelling) the type which is a little tart with povidla on top (plum jam). This is Czech pastry. Part of getting my balance back. I am taking them to my sister's card party.
Posted by judy at 9:25 AM No comments:

Reorganized my website some and sent the address to St. Louis Art. This is a nice website that links to St. Louis Artist's websites. I gave them a link back. http://www.saintlouisart.com/html/groups.html
Posted by judy at 9:23 AM No comments:

I have been free to paint for over a year now. I still have a lot of things backlogged that I want to paint in a realistic sort of way and then maybe I can break out and let it flow. I want to try some more shows--hope that works. Reaching back for some more balance as painting got rather obsessive for a while.
Posted by judy at 7:14 AM 1 comment:

judy
United States
Website: http://www.repkeart.com The colors I choose reflect my emotional response. I often mix colors wet on the canvas using a palette knife to define shapes. I am also fascinated with the effects of light defining areas of dark and light and blended grayed tones to suggest atmosphere. I develop my work by painting or sketching on site or from my own photographic references; then through contemplation, condensation, transformation and revelation the finished work emerges. I have shown in juried shows at Framations Gallery, Queeny Park, Art Walk in St. Charles, a curated show at Des Peres Hospital and ongoing representation at Grace Church and the Northside Artspace at the Regions Bank Building in Clayton. I am a member of Art Saint Louis, Missouri Watercolor Society, Northside Art Association and Artists of Grace. I graduated from the University of Missouri as an Art Education Major and have since taken workshops with Susan Sarback (the School of Light and Color), Mel Stabin and Frank Webb.